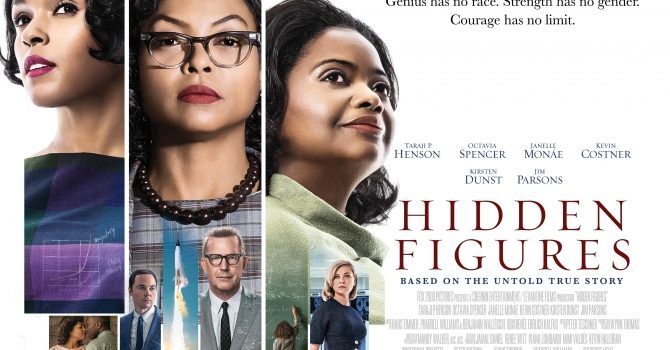 In a world where a tyrannical, self-indulgent and incessantly repugnant leader is in charge of one of the most powerful countries, we’ve seen plenty...

In a world where a tyrannical, self-indulgent and incessantly repugnant leader is in charge of one of the most powerful countries, we’ve seen plenty of evidence where we the people can unite to show such individuals that togetherness and community rules supreme. This has stretched within the film community through specific awards ceremony speeches and beyond, with certain films being earmarked as the ones to hammer home the message to those people who are less in touch with the times where integration is key. One such film is Hidden Figures, providing a stark reminder of the boundaries broken to ensure black Americans were treated with equality from the days of Martin Luther King Jr to this day.

Having secured a groundbreaking victory at this year’s SAG Awards, the UK release of Hidden Figures finally arrives this week, leading to the film’s involvement in The Oscars. Featuring a stellar cast including Octavia Spencer, Kevin Costner, The Big Bang Theory‘s Jim Parsons, Kirtsen Dunst and Taraji P. Henson, it’s certainly the feel-good film that we all need right now.

With the dust now slowly beginning to settle on Oscars front-runner La La Land, it’s now time for a much more serious film to step up to the plate. A film that delivers the importance of black history and indeed our very own black actors, actresses and filmmakers within the industry, Hidden Figures is certainly an important film and one that defines the notion of feel-good cinema.

The film itself follows three black women working for NASA during the battle for supremacy between America and Russia in the race to reach the realms of space. Taraji P. Henson’s mathemetician Katherine Goble Johnson soon finds working under Kevin Costner’s Al Harrison much more challenging with everyone else seemingly against her, Octavia Spencer’s Dorothy Vaughan has the odds to overcome in forging herself into a supervisor within NASA, while Janelle Monae’s Mary Jackson is the one in the trio vying to become an engineer. Each woman has their part to play in America’s space race but they must overcome racial discrimination and their biggest life challenges to make that difference.

Hidden Figures is a movie about overcoming the odds and making a difference and director Theodore Melfi certainly delivers that message with the utmost ease, blending some truly serious and biting moments of serious drama with a light-hearted tone that makes this certainly one of the more likeable entries in the Best Picture race for this year’s Oscars.

The focal points of the cast, Henson, Spencer and Monae certainly make for a leading trio who we really want to triumph, Spencer channeling her Oscar-winning performance in The Help and Monae providing the youthful spice, while Henson proving to be the perfect leading lady to overcome those odds and have us cheering for her come the close of the film. These women are joined by Dunst on her game as a biting high-profile NASA employee, while Kevin Costner is one of the best performers of the ensemble, once again showing that his best acting days definitely aren’t past him. What’s most disappointing is Jim Parsons, somewhat used as a more annoying version of his television character just without the comic book references.

What must be said is that Hidden Figures is a good film but it isn’t without its flaws. Pharrell’s soundtrack slowly becomes an annoyance and features at moments in which they don’t particularly always feel tonally fitting and the overall story of the film, while inspiring, feels a little bit flat and overly predictable. It will inspire you and have you leaving with a smile on your face but ultimately Hidden Figures is one of the weaker contenders for this year’s Oscars show-stealer.

Hidden Figures is out in UK cinemas on 17th February.