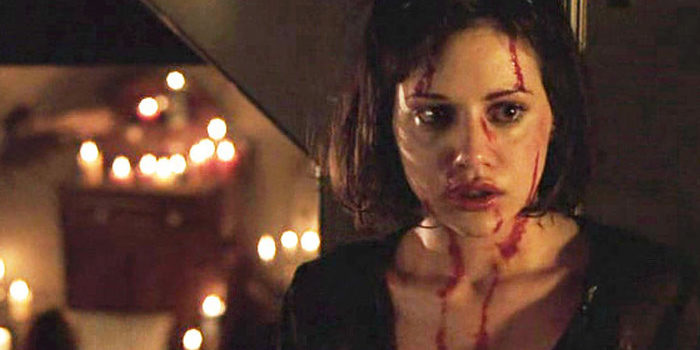 Throughout March on Horror Channel, Friday and Saturday nights will fall prey to wicked witches, scheming serial killers and mysterious monsters as the UK’s...

Throughout March on Horror Channel, Friday and Saturday nights will fall prey to wicked witches, scheming serial killers and mysterious monsters as the UK’s number one genre channel presents ten prime-time premieres, including the first UK showing of THIRST, Greg Keifer’s blood-sucking alien thriller. There are also network premieres of Michael Winner’s theological horror THE SENTINEL starring Chris Saradon, Ava Gardner and Christopher Walken and the 2016 US remake of THE WICKER MAN, written and directed by Neil LaBute and staring Nicholas Cage.

High schoolers in a sleepy small town discover that there’s a serial killer in their midst, The killer seems to be going after virgins, rather than promiscuous types, so they start throwing sex parties to avoid being next. The late Brittany Murphy stars as the virginal daughter of the town sheriff (Michael Biehn), who takes it upon herself to find the killer and uncovers a complex web of lies and secrets.

Academy Award winner Christopher Walken gives a notable performance early in his career in this chilling film about an young actress (Cristina Raines) who is terrorised by supernatural forces when she moves into a strange New York brownstone. The all-star cast includes Chris Sarandon, Ava Gardner, Burgess Meredith, Sylvia Miles, and Eli Wallach.

Forced underground after the planet is plunged the next ice-age, the inhabitants of Colony 7 struggle to survive below the world’s frozen surface. When they mysteriously lose contact with the only other remaining settlement, Briggs (Laurence Fishburne) decides to lead a dangerous mission into the frozen wasteland, determined to discover their fate. It could be humanity’s last stand.

From the producers of “The Haunting In Connecticut” comes the chilling true story of the Wyrick family. Upon moving into their new home, mother and daughter Lisa and Heidi Wyrick begin experiencing disturbing visions. Do the phenomena hint at the onset of a shared family madness, or are they clues to a real-life nightmare that once took place on the property?

Deep in the scorching desert, a group of wayward teens are stationed at a wilderness boot camp. However, after they stumble upon and break a strange and mysterious extra-terrestrial ‘orb’, one by one, they begin to experience terrifying attacks from a ruthless blood sucking alien. With no chance of rescue, and nowhere to hide, their only chance for survival is to fight for their lives.

Keanu Reeves stars as a creepy, studious serial killer who torments an emotionally damaged police detective (James Spader) by sending him pictures of his future victims one day before he kills them. The detective must try to identify and locate these women before it is too late. Academy Award-winner Marisa Tomei plays the detective’s psychiatrist who might find herself in harm’s way.

A heroic crusader (Nicolas Cage) and his close ally (Ron Perlman) return home after decades of fierce fighting to find their world destroyed by the Plague. Believing a witch to be responsible, they are commanded by the church Cardinal (Christopher Lee) to transport the witch to a remote monastery where monks will perform an ancient ritual to rid the land of her curse. But they soon discover the girl’s dark secret and find themselves battling a powerful and destructive force that will determine the fate of the world forever.

When motorcycle cop Edward Malus (Nicolas Cage) receives a letter from a woman (Kate Beahan), begging him to find her missing daughter, he sets off to Summersisle, a remote island off the Washington coast, where he discovers a way of life time has forgotten. Nothing on the mysterious island is what it appears and no one will acknowledge the girl’s disappearance. As Edward steps up his search and clashes with the islanders, he discovers the terrifying truth about their ancient belief system.

The residents of Los Angeles are awakened in the dead of night by an eerie light which  is hypnotically drawing people outside before they suddenly vanish into thin air. As the world unravels, a band of survivors soon discover they must fight against the onslaught of a mysterious alien horde. Who or what are these extra-terrestrials and how long before mankind succumbs to their overwhelming power?

The time is the near future. The US Navy has established a secret undersea laboratory base, DeepStar Six, below the ocean’s surface. A crew of eleven, led by Dr John Van Gelder {Marius Weyers) is supervising the exploration of undersea colonization but when they open up a huge cavern, located on the ocean floor, the command centre is violently attacked and the crew members make a startling discovery…not all aliens come from space.