How and Where to Play Poker in Red Dead Redemption 2 Red Dead Redemption 2 (RDR2) is a huge game that will see you live out the exciting life of Arthur Morgan as he robs banks, frees slaves and occasionally, indulges in a game of poker in the back room of a saloon.

Gambling games carry over from the previous instalment, which had poker, horseshoes and the risky knife game. This instalment also features poker, and this time, it plays beautifully. Poker was a big part of the culture in the Old West, and so, we’re happy to see it in both the main storyline and as a side quest in RDR2.

Poker in RDR2 follows the same rules as Texas Hold ‘em, the most popular type of poker game. If you want to get good at the side quest, you first must get good at the game!

The first time you will ever play in RDR2 is in the main story mission ‘Who is Not Without Sin’ in Chapter 2. You walk into Flatneck Station and see your local clergyman Reverend Swanson having a bit too much fun. The sensible and noble course of action is to take his place in the game.

Your first hand will always be Q-T, and if you play the hand out to the end, you will hit two pair and beat your opponents, one of whom holds Q-J. After this point, you’re alone, and the game will generate random outcomes like an online poker site.

You can play on for a while, but the game will eventually force you to leave to continue the mission. Once the mission is complete, you can return to the location and play for as long as you want. At that point, you will also have unlocked the other poker locations. 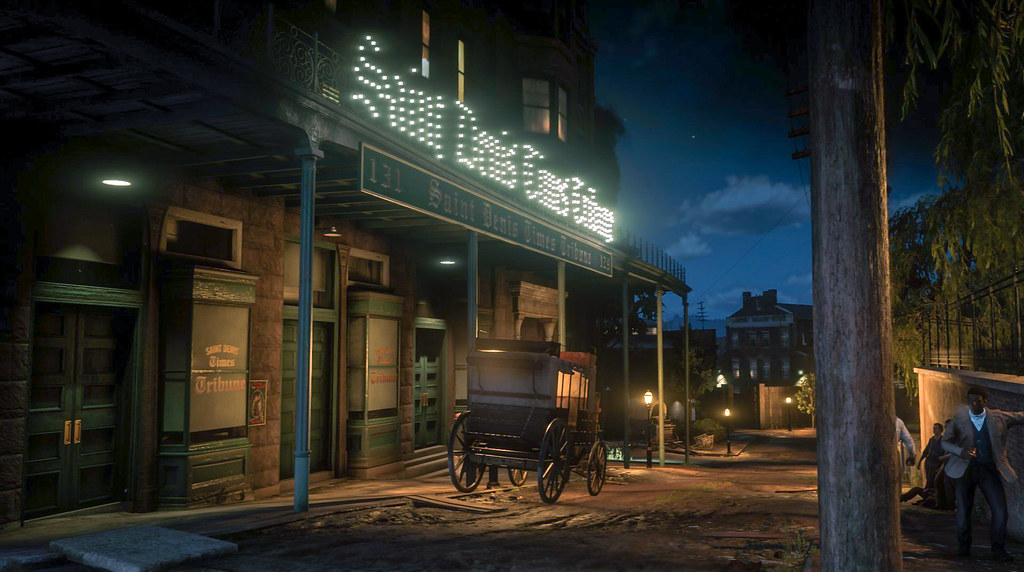 After the initial game of poker, you will have the opportunity to play at several different locations across the map, including Flatneck Station. You can also find people to play with at your camp in Horseshoe Overlook. The other locations are as follows:

The poker games happen in the saloons of each location, though the saloons are not open 24/7 like modern casinos. They close at night. So, go during open hours to find a game.

The best place to play poker in RDR2 is arguably Saint Denis. Here, the stakes here are higher, and as it’s the biggest city in the game, there are lots of players to sit down with for a round or two. Blackwater and Tumbleweed are not unlocked until much later in the game when you’ve reached the story’s epilogue.

There is also one other one-off location that you will play poker in during the main story. In the Chapter 4 mission ‘A Fine Night of Debauchery’, you will play on a river steamboat, dressed up in your finest modern attire, against a group of shady businessmen.

Without giving too much of the story away, the whole game is rigged, so although you do have a certain amount of control over decisions, you will find it hard to lose this game. You have an accomplice, and even the dealer is on your side. Nevertheless, this isn’t a smooth ride!

How to Beat Poker in RDR2

As mentioned, the poker rules in RDR2 are the same as Texas Hold ‘em, and so, the aim is to win by having the best cards or by forcing your opponent to fold by making bets. You can see the full rules in the Help Menu> Activities >Poker.

The player AI is quite impressive, and for a mini-game, RDR2 poker plays well. If you watch carefully, each player at the table will have a personality and style of play, from a conservative to maniac.

Even the stakes in RDR2 poker are low, especially as you get further in the game. Such has become a talking point, with some critics saying that the mini-game would become more relevant if the stakes were raised. Most games are 1c/2c, with the 2c/4c available in Saint Denis.

Ultimately, that means that poker is not a valid way to make money in RDR2. So, aside from the main missions, it is mostly for fun. There are also challenges that can you can only complete by playing poker.

RDR2 has several chains of challenges to complete, from sharpshooter to gambler. Completing each chain will unlock specific rewards. In the gambler’s chain, there are three challenges that relate to poker. They are:

Poker is an excellent addition to Red Dead Redemption 2. Sure, you could argue that the low stakes of the games make it irrelevant, but the developers have taken care to make sure the game plays well. It makes a nice touch when it appears in the story and a nice break as a side quest. A neat touch indeed.