FROM THE DISTRIBUTOR THAT BROUGHT YOU ‘FREE SOLO’ COMES THE NEXT HEART-STOPPING DOCUMENTARY THRILLER “Uniquely Terrifying” – Matt Glasby, Total Film “Captivating and emotional,...

FROM THE DISTRIBUTOR THAT BROUGHT YOU ‘FREE SOLO’

COMES THE NEXT HEART-STOPPING DOCUMENTARY THRILLER

“Captivating and emotional, Last Breath will stay with you long after the end credits” – James King, BBC Radio2

Trapped at the bottom of the ocean…

The heart-stopping and staggering true-life story LAST BREATH is released in UK cinemas by Dogwoof on 5 April 2019 after premiering at this year’s Glasgow Film Festival. Told through first-hand accounts, powerful archive and black box footage from the time and pulse-quickening underwater reconstructions, LAST BREATH is a documentary thriller unlike any other. 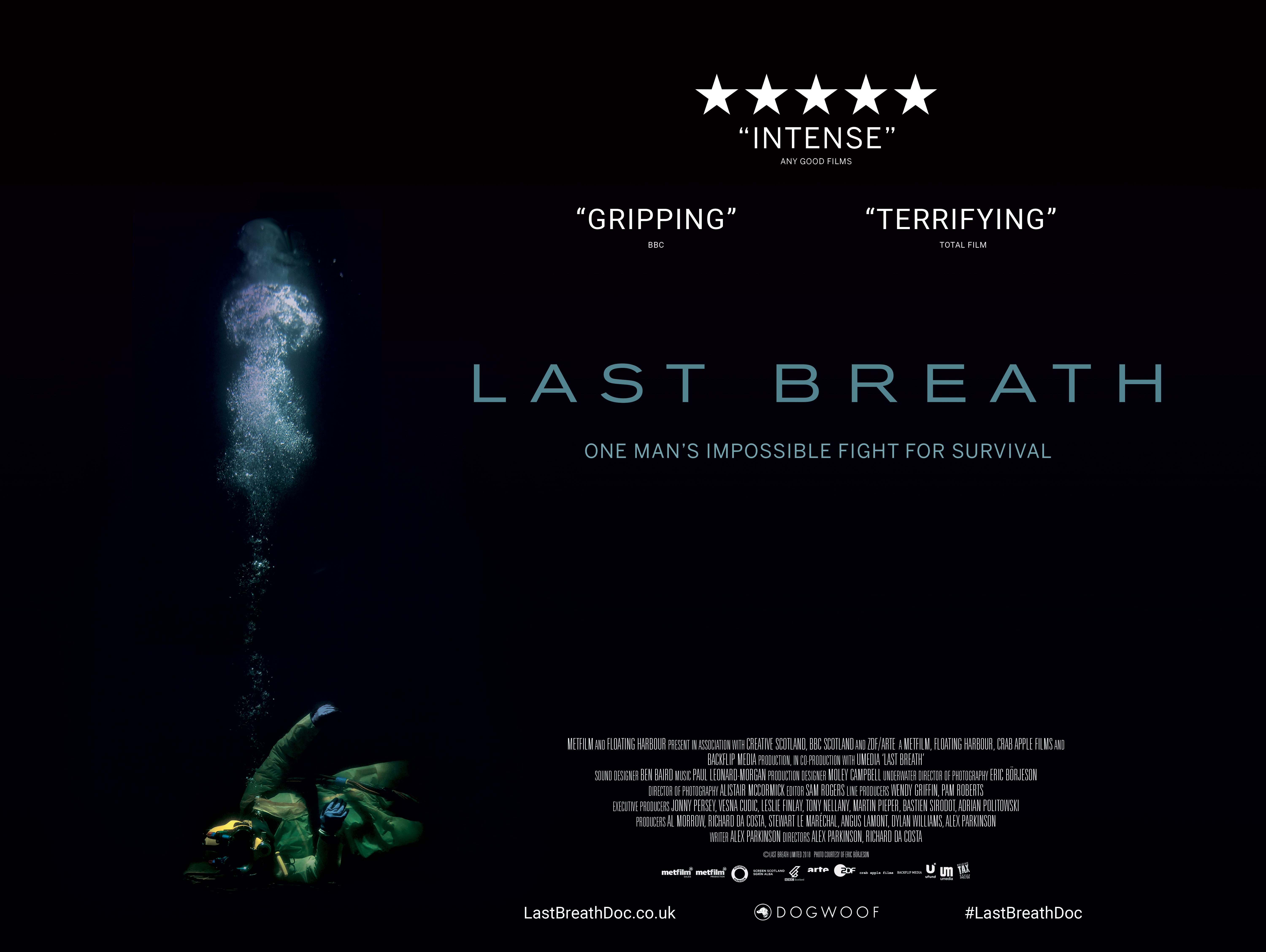 Filmmakers Alex Parkinson and Richard da Costa bring their years of experience of filming in challenging environments to a film which immerses viewers in the mysterious and claustrophobic world of saturation diving.

A routine maintenance dive on a North Sea oil well turns into a fight for survival as a computer error aboard the commercial ship The Topaz sends the boat drifting away from its dive site, dragging along everything attached to it: including commercial diver Chris Lemons.

With his diving umbilical cord snagged on a underwater structure and the full weight of the 8,000 tonne ship strained against his lifeline, Chris becomes stranded on the seabed with only 5 minutes of breathing gas and rescue 30 minutes away. LAST BREATH is a truly incredible real life story and race-against-time thriller which will leave audiences gasping.

ALEX PARKINSON (Director, Producer, Writer, DOP) started out as an editor, and has more than 15 years of experience directing and producing documentaries for a variety of global broadcasters, including the BBC, National Geographic, History and Animal Planet. In all he’s made more than 70 hours of films, ranging from multi-camera studio shoots to filming in some of the remotest deserts and jungles on earth. This breadth of experience has made Alex highly-skilled at writing and directing editorially-complex shoots in often challenging environments, now including the North Sea.

RICHARD DA COSTA (Producer, Director) has been professionally telling stories since 1992, working as an actor, before moving into writing and directing. He has worked for major theatres on everything from Shakespeare to children’s shows, including as writer/director: Planet Time (adaptation), Treasure Island (adaptation), and The Adventures of Robin Hood. He has worked for BBC TV and Radio, as well as for ITV, Sky Movies, Channel Four and Sky Sports. Richard is the founder of Floating Harbour Films.

AL MORROW (Producer) is an award-winning producer and Head of Documentary at MetFilm Production. Her latest film is THE SCHOOL IN THE CLOUD directed by Jerry Rothwell, which premiered at CPH:Dox 2018. She produced SOUR GRAPES directed by Jerry Rothwell and Reuben Atlas for Netflix, Arte and VPRO and the Grierson Award winning HOW TO CHANGE THE WORLD directed by Jerry Rothwell (Sky Atlantic/BFI/Impact Partners/CTV), which premiered as a Day One film at Sundance Film Festival 2015. Previous films also include Jeanie Finlay’s films PANTOMIME (BBC Storyville) and THE GREAT HIP HOP HOAX (BBC/Creative Scotland), Sarah Gavron’s VILLAGE AT THE END OF THE WORLD, which premiered in Competition at 2012 BFI London Film Festival; Jerry Rothwell’s TOWN OF RUNNERS (ITVS/Britdoc C4), which premiered at the 2012 Tribeca Film Festival; the Grierson nominated film DONOR UNKNOWN (More4/ITVS/Arte) winner of the Audience Award (online) at Tribeca Film Festival 2011 and MEN WHO SWIM (BBC Storyville/Arte/SVT/VPRO) winner of the Audience Award at Silverdocs 2010; HEAVY LOAD (BBC Storyville, IFCtv, ITVS); and DEEP WATER (Pathe/UKFC/FilmFour) winner of the Grierson Award for Best Cinema Documentary.

Dogwoof is regarded as the foremost documentary specialist brand in the world, and is a stamp of the highest quality content. We sell worldwide, distribute theatrically in the UK and invest in the production of creative feature docs and docu-series. Founded in 2004, notable releases include theatrical hits such asBlackfish and Dior and I and acclaimed titles such as OSCAR®-nominated Cartel Land and BAFTA-winning The Act of Killing. Dogwoof recently launched a film investment fund – TDog Productions – focusing on the development and production of feature docs and docu-series, gearing up the company towards vertical integration of production, sales and distribution.