LEGO Dimensions has been one of the major video game releases that eluded me over the last year. But nonetheless it has been a...

LEGO Dimensions has been one of the major video game releases that eluded me over the last year. But nonetheless it has been a massive step forward in the evolution of the LEGO Games franchise. And after Filmoria were invited to attend a special launch event in London for the latest Wave of expansion packs – we now have a better grasp at what makes this massive game so popular. From combining characters from your favourite franchises to complete quests, competing in race matches, or battling it out in one of many themed Battle Arenas – LEGO Dimensions encourages players to go beyond comprehension and imagination

So as the season of giving approaches – here is my quick recap and thoughts from the event.

As someone who had never played previously, it was rather befitting that I was able to try out differing modes and characters as both a single player and with a troupe of co-op players too. Gameplay and comparisons with the discontinued Disney Infinity  aside, there is something for everyone within the game. It’s a franchise smorgasbord – featuring LEGO stalwarts Batman, Gandalf and Wyldstyle as well as various others from Back To The Future, Harry Potter, Doctor Who, DC, Adventure Time, Ghostbusters, The Simpsons, Scooby-Doo…It is endless. LEGO really does bring everyone together. The key idea is fun, and that’s all it’s going for. And hell, the world needs that right now.

My first taste of the game involved yours truly stepping into a harness, ascending into a mock ventilation shaft, hooked up to a panel above and peering through a rounded head-rest (think massage parlour). There, with the grandiose tones of the Mission: Impossible theme ringing around, I took control of Ethan Hunt in the world of M:I. Stuck in the middle of a puzzle, I simply paraded around in his slick motor and used the time to try out his abilities – including magnetic gloves(!) and grappling hook amongst a plethora of others. The whole concept of LEGO Dimensions was completely foreign to me as you know, so it did end in one of the event staff to coordinate me in terms of how the base system works in the context of what we see on-screen during gameplay. That being said, if you’re looking for a game pack with sweet gadgets and a little espionage vibe – this would be the one for you. 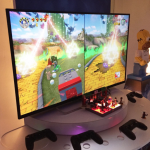 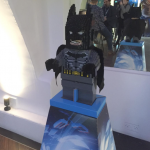 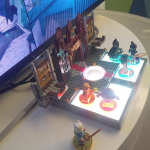 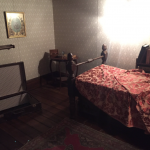 Then it was time for brand new Story Pack gameplay! I was directed to an awesome looking set of a bedroom inspired by Fantastic Beasts & Where To Find Them, with a rather beaten briefcase situated in the foreground of an elevated stage. I looked at the two event staff, mystified, before the case was opened and I was instructed to step in…..Slowly reaching the bottom a wooden staircase, I turned to find myself transported into Newt Scamander’s magically expanded briefcase itself (clever illusion, you guys, clever illusion), for a chance to sample one of the new levels on offer.  The addition of the Fantastic Beasts pack is of course rather convenient as it coincides with the release of movie of the same name – so I was pretty anxious to see how this would compare with the previous LEGO Potter games I had played years before. Essentially, it plays out much like you would expect in those terms. Newt has varying magical-based abilities, being able to manipulate objects and also grow or decrease in size in order to solve puzzles and reach objectives. Using levitation spells and the shrinking ability in order to bypass an obstruction. Although the gameplay felt stale, the inclusion of this new Potterverse character (not disregarding Niffler the…ummm Niffler?) will certainly be a massive selling point for the Dimensions expansion packs. But in saying that, I think the biggest attraction to these games is more based on variance of characters and interaction, rather than the LEGO gameplay that we have been accustomed to and have grown fond of. A nice touch at the end of my time playing the level was being ‘GIF’d’ upon exiting Newt’s briefcase, and sharing the goods on social media!

We stayed in J.K Rowling’s Wizarding World with a trip into the future to spend time with our old mate, Harry Potter. Chilling out in his cupboard under the stairs back on Privet Drive – reimagined from the Potter films, I re-acquainted with the Nimbus as Harry. Scaling around the skyline of Hogwarts and navigating the map to locate collectibles. Later going full-on Dark Arts and causing mayhem in the great hall! Before long, I took to the rooftops as Batman and cleaned up what seemed like an endless supply of Studs. Everything is resolved when you’re Batman.

The next gameplay was set in a scaled down movie theatre. I was handed a pair of 3D glasses at the door entry and sat with two fellow attendees as we were treated to a Gremlins-style cinema experience – complete with throwing popcorn and screen silhouettes. This was possibly the most fun I had during the afternoon. A frenetic Capture the Flag match set in Sonic’s Carnival Night Zone as part of the new Sonic The Hedgehog Level Pack, and a nail-biting round of Tick, Tag, Boom taking place in the Gremlins Battle Arena from the newly released Team Pack! This was a great spin on tried and true gameplay modes with various power ups and sabotage elements very reminiscent of Mario Kart. And that’s not a bad thing. The highlight of the event for me and most certainly for Wave 7 releases.

Finally, it was Adventure Time (albeit a very short time, mad rush) with a Battle Arena objective match in The Breakfast Kingdom – which ties in with the newly released Marceline The Vampire Fun Pack. Playing as Jake, I decided to run rampant across the stage – essentially ignoring objectives and experimenting with the character. Jake has several adaptable physical forms which included a Raiders-style rolling boulder which was a hoot. I would’ve liked to have had more time on this gameplay, I really dug the art direction and the general tone. I’m not overly familiar with Adventure Time, but I could tell from the few minutes I had that there is a real charm and an appealing, tongue in cheek humour which appears to have translated well to this platform.

Overall, the launch of LEGO Dimensions Wave 7 was a fun, surprising and immersive experience. To no lesser extent, it was a great event arranged by the organisers and I can not wait to see what the future holds. With lots of refreshing and unique additions to the ever-growing game, fans of the series and those considering stepping into Dimensions for the first time will find their brick fix!

The launch of LEGO Dimensions Wave 7 includes a Story Pack based on WB’s Fantastic Beasts & Where To Find Them, a Sonic The Hedgehog Level Pack, 3 Fun Packs featuring Tina Goldstein from Fantastic Beasts, Marceline from Adventure Time & E.T: The Extra-Terrestrial, and a Team Pack containing Gizmo & Stripe from Gremlins. Available now for Playstation 4 & XBOX One.