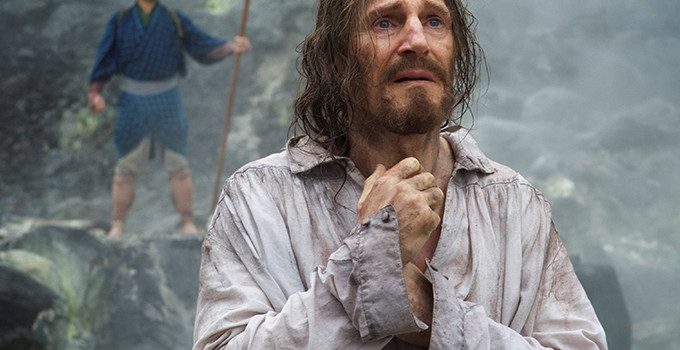 Martin Scorsese’s Silence, based on Shusaku Endo’s novel of the same name, has been twenty-five years in the making. It’s also a markedly unusual...

Martin Scorsese’s Silence, based on Shusaku Endo’s novel of the same name, has been twenty-five years in the making. It’s also a markedly unusual turn-out from the director of Taxi Driver, Gangs of New York and Wolf of Wall Street – although drenched in similar levels of violence and beauty in turn.

Silence follows two Portuguese priests, Rodrigues (Andrew Garfield) and Garupe (Adam Driver) travelling to Japan in order to track down their fellow priest and teacher, Ferreira (Liam Neeson) after reports that he has renounced Christ. Seventeenth century Japan proves to be dangerous for the two priests – and for their fellow Christians living there; what follows is a sometimes torturous, sometimes absurd, always complex period piece.

Scorsese’s film is not for the impatient; totalling at two hours and forty minutes, it’s a slog with a dragging second act. But – as bizarre as this is to say – I don’t think Scorsese has necessarily placed an importance on Silence being a great, entertaining film. It’s sort of the anti-Malick; where Malick forces his audience to stew in lyrical beauty, the slow pacing of Silence encourages to endure, almost without pause, misery. You could shave off a good hour from this film and it would be a far better film, and a definitive Oscar contender – but I think that might defeat the purpose of it.

What that purpose might be, however, is unclear. If you were to see this film for anything, see it for its performances. Garfield certainly delivers with an intensity that hasn’t been seen since Mark Romanek’s criminally underrated Never Let Me Go. His performance, at times, is a little earnest – his delivery of the line “we are all going to die!” was imbued with enough melodrama that the woman sat next to me burst out laughing – and perhaps if Garfield were a little older, he might have pulled it off. But, again, we get the sense that that’s not the point; Garfield’s priest is, if anything, young and earnest, increasingly arrogant – and then broken, all of which Garfield tracks perfectly. That being said, the performance was nicely countered by Adam Driver’s natural intensity; whereas Garfield brought some theatricality to the part, Driver’s naturalism was refreshing, although largely limited to the first act – and, of the two, arguably manages a hokey Portuguese accent far better.

Beyond the performances, the film is beautiful – at least, at its beginning. Cinematographer Rodrigo Prieto deserves commendation, constantly flushing the frame with steam and fog, so that our first impressions of Japan are that of clouded beauty. The lingering wide shots of the first act, however, are swiftly abandoned for stolid medium close-ups, as violence creeps into the narrative, and its cooler colour palette progresses into more neutral browns and ambers. Prieto’s shooting of said violence is unflinching – but it’s his queasy zooms and pans from character to character that add a certain dynamism, just about saving the film from its own crippling pace.

Said pace certainly leaves a lot of time for discussion; elongated chats about the state of religion in Japan – and the nature of religion itself – are drawn-out and almost entirely unnecessary. The films carries a knotty portrayal of religion that, arguably, would be just as complex if left unsaid. However, at the end of the day, this film is a mediation on the power of faith – how it changes and how it survives. The characters go through the same thought processes that the audience do – and for this I would say, check your cynicism at the door. Silence can be boiled down to an almost three-hour essay piece on the nature of religion, and requires a certain level of empathy – and an abandonment of scepticism – that, like everything else in the film – the pacing, the violence, the performances – is slowly but surely pushed to the extremes.

Is Silence a beautiful film? At times, no. Is it even, traditionally, a brilliant film? I would argue perhaps not. Should you go see it? Yes. It deserves to be experienced in full, to be considered and mulled over long after you walk out of the cinema. It’s an academic experience, an essay and an indictment and a love letter to religion all at once with Scorsese’s fingerprints smudged all along it – and for that, it’s brilliant.

Silence is out in cinemas now.