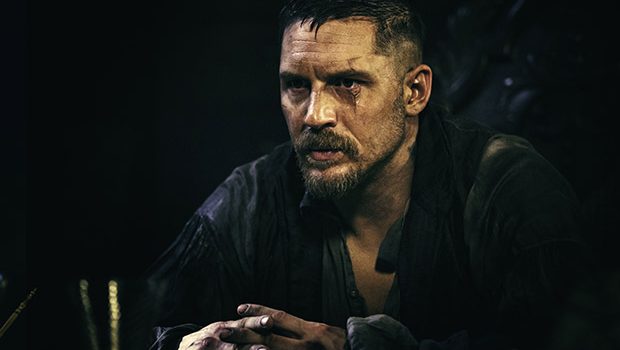 The mysteries continue to intensify in the dark third episode of Taboo starring Tom Hardy. Here's our official verdict.

Three hours into the British-American mystery drama Taboo, and it is clear that significant attention is being paid to keep up with the promise of such a title. As we near the half-way mark of this introductory season, the shock factor was cranked up a notch, but one is starting to feel as though father and son duo Tom and Chips Hardy, alongside Steven Knight and Sir Ridley Scott are too keen to relish in ambiguity as opposed to excelling narrative.

Whilst last week’s episode largely replicated steps made by the pilot, this third episode pushed the focus of shrouding Hardy’s beguiling protagonist James Keziah Delaney in more secrecy and macabre backstory, without offering a real sense of definition. A swift Twitter search following the episode, and the universal response is quite rightly a great big “huh?”. This isn’t to say that Taboo is not an enjoyable and captivating watch, because it most certainly is, but the script needs to start applying texture as opposed to further transgression.

Opening with a distinct and distressing image of a pallid corpse gently lapping in the muddy shores, things suddenly take a grisly turn as crabs begin crawling from the recesses of his shattered, blood-sodden guts. This particular body is that of the assailant who stabbed James at the climax of last week’s episode, only to then have his throat ripped open as Hardy’s primal antihero sunk his gnashers into flesh. James is heavily injured from the altercation, and finds himself under the needle (and interrogation) of Michael Kelly’s Dr. Dumbarton, who is operating as a contact for United States spy Carlsbad. As the battle for ownership of Nookta Sound intensifies, Delaney explains that for the fair trade of his land, he demands a monopoly on the tea trading industry between the US and China; a far cry from the handsome sums of money thrown at him by The East India Trading Company and its head, Sir Stuart Strange (Jonathan Pryce). He certifies a will which declares that in the event of his death, all heirs and assets will become the property of the US, therefore rendering Strange’s ploy to have him murdered entirely redundant. The EITC need James alive, and they need him to cooperate.

Meanwhile Delaney’s servant Brace (David Hayman) is confronted with an unfamiliar – and unwelcome – arrival in Lorna Delaney (Jessie Buckley), Horace’s widow, who is fully aware that a portion of the Delaney manor, and indeed Nookta Sound is rightfully hers. She takes up residence in the property, but her presence causes further issues as she’ll serve as an indirect gateway between James and the dangerous men who wish to see him lifeless. He also engages in a particularly uncomfortable encounter with sister Zilpha (Oona Chaplin) following a prolonged exchange of letters.

To return to an initial point, this episode very much documented why the show has such a name. Lashings of colourful language peppered the hour, as did sequences of gore, S&M, incest, and perhaps most distasteful, a sequence shared between Zilpha and her ghastly husband Thorne Geary (Jefferson Hall), who during a table dinner belittled her for having such heavy periods, and stated “I apologise that I’m not related to you, but you could allow your c**t to swallow the work of an honest man,” among other nasties. The acidity of dialogue in this third hour was particularly potent, giving the dynamic between the many conflicting characters a true sense of menace, power, and aggression. Largely speaking, Hardy’s lead is relativity reserved verbally, but even he begins to spit muscular, shrapnel-shroud prose.

As expected, the collective performances are excellent, with Pryce and emerging new player Solomon Coop (Jason Watkins) – much more than the kowtowing servant to the Mark Gatiss’ Prince Regent – completely stealing the episode. A heightened, thunderously entertaining moment shared between the duo at the EITC head office was a delight, as they spit bile to and fro, attempting to find a universal sense of interest when it comes to the UK’s position on securing Nookta Sound, and eliminating Delaney. Taboo‘s biggest issue throughout this hour however was failing to assist the hard work it had previously built in a scene. A slice like Strange and Coop’s was so electric that we needed to see its progression later on, not simply set up another plot point, or smear more smoke over something already convoluted.

There is little doubt that this show is an excellent showcase of craft, performance, aesthetics, and tone, but as we reach the midway point, Knight and company need to start clearing some of the heady smog which lingers across its storylines.

Taboo airs on BBC One HD on Saturday evenings at 9:15pm. It airs on FX in the United States on Tuesday evenings.