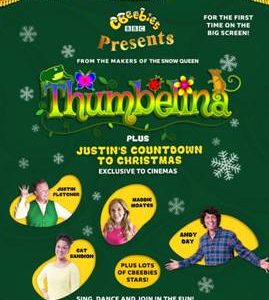 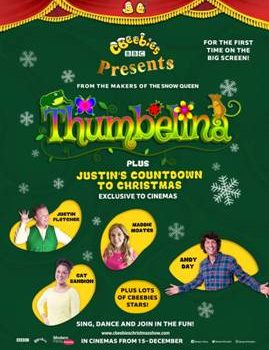 The much-anticipated annual CBeebies Christmas Show is coming to the big screen for the first time!

The UK premiere of Thumbelina in cinemas will be on December 9 and will be released in cinemas across the UK from the 15...

The much-anticipated annual CBeebies Christmas Show is coming to the big screen for the first time for a family friendly Christmas cinema experience in 2018.  CBeebies’ favourite personalities are lined up to star in this unique adaptation of the original Hans Christian Andersen tale, Thumbelina, available in UK cinemas from the 15 December 2018.

The makers of Alice in Wonderland, A Christmas Carol and Snow Queen will delight audiences this year with the classic tale of Thumbelina and in addition cinema-goers will see an exclusive show, “Justin’s Countdown to Christmas” starring the much-loved Justin Fletcher (Something Special).

Produced by awarding winning BBC Children’s In House Productions, the show is set to deliver a colourful spectacle of music, dance and action packed comedy with a generous smattering of goodies and baddies.

Thumbelina follows the adventures of a thumb-sized girl in an oversized world of woodland creatures and giant plants as she tries to find out the truth about her identity.

Born inside a flower, she marvels at the world around her but quickly realises she doesn’t know what, where or who she is.  She has no name and is lost and alone, with only a dream to fly like a butterfly.   She is drawn to the warmth and excitement of a nearby animal party where bugs, spiders, toads, and mice are celebrating the End of Summer and Start of Winter, but the party is not what it seems. Can Thumbelina find the strength to stand up for herself as the animals bicker over her and will she discover the truth about who she really is?

The 60s influenced music will bring the whole show to life with new songs guaranteed to get the audience singing and dancing enough to raise the roof. The 2018 cast features many of CBeebies’ most popular actors and presenters including Justin Fletcher, Ben Faulks and Andy Day.

The UK premiere of Thumbelina in cinemas will be on December 9 and will be released in cinemas across the UK from the 15 December.

Modern Films is a London-based, female-led film production, distribution and event cinema company, working with rising and established talent from around the world and bringing innovative stories to global audiences. We focus on creating connections between content, context and curation, with a particular emphasis on pressing social issues of our time expressed through the power of cinema and cultural expression. Modern Films was launched as an alternative to the traditional model of the film value chain to work across borders, media and windows.