This year is far from over, but movie buffs are already anticipating next year’s thrill-fest of a cinema line-up. From the latest instalment of...

This year is far from over, but movie buffs are already anticipating next year’s thrill-fest of a cinema line-up. From the latest instalment of the 007 series to hot remakes of classic 80’s mysteries and some exciting new releases, there is definitely much to get excited about in terms of thriller films in 2019. We list down some of the top upcoming super-suspenseful bone-chillers that will keep you on the edge of your seat:

“Everyone has demons” and “There’s something new to fear” are just some of the most gripping taglines of Marvel’s upcoming X-Men spinoff. The New Mutants, directed by Josh Boone, is much awaited for its gripping plot as much as its all-star cast, which includes young actors who are not new to the genre—from Split’s Anya Taylor-Joy to Game of Thrones’ Maisie Williams, and Stranger Things’ Charlie Heaton. The plot circles around five young mutants who are just discovering their out-of-this-world abilities while being held against their will in a secret facility, fighting to save themselves from their current predicament and escape their past sins.

The New Mutants is a much different take than what you are used to seeing in X-Men spin-offs and films. To combat superhero fatigue, Boone brings to the table a horror-thriller inspired by an amalgamation of horror royalties, namely, The Nightmare on Elm Street and One Flew Over the Cuckoo’s Nest, and The New Mutants comics. Unsure about Boone’s take on your beloved MARVEL staple? Perhaps this trailer will help you ease into this fresh addition to the X-Men cinematic universe:

Set for release early next year, Three Seconds is an action crime thriller based on a Roslund/Hellstrom novel of the same name. The film stars Ana de Armas, Rosamund Pike, Joel Kinnaman, and Clive Owen. The story line revolves around an undercover ex-convict who intentionally gets himself back into prison in order to infiltrate the mob inside. 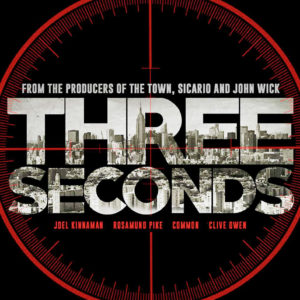 Godzilla 2 (Godzilla: King of the Monsters)

Also set for next year is a remake of one of the most classic monster thriller films, aptly titled, Godzilla: King of the Monsters. Millie Bobby Brown top bills this newest addition to Legendary Pictures’ and Warner Brothers’ cinematic monster-verse. The film depicts the next chapter in the life of the feared titan. Director Michael Dougherty (Krampus and Trick r Treat) pits the legendary Godzilla against a battery of other god-sized monsters like Rodan, Mothra, and King Ghidora. Humanity’s existence hangs in the balance as these ancient superspecies rise once more and vie for supremacy.

Here’s Millie Bobby Brown in the first official trailer of this 2019 precursor to Godzilla vs. King Kong:

Daniel Craig will be reprising his role as the agent 007 in what would be the 27th instalment of the James Bond series. Production hasn’t even begun for the new Bond film and the plot is still very much under wraps, but there’s no stopping fans from speculating what their favourite agent’s next adventure could be. Fan-made trailers have been storming the web since the movie’s announcement,  a couple of which are linked below. A big Bond fan yourself? Tell us your thoughts about this long awaited sequel!

In this next instalment of the creepy clown movie, IT: Chapter Two follows the life of the Losers Club 27 years later, when they’ve all grown up and moved on and away from the events of the last almost-3 decades, only to be brought back by one devastating phone call. Bill Skarsgard returns as Pennywise along with a swell cast of characters, including James McAvoy, Bill Hader, and more.

Prepare yourself for this thrilling ride with this Top 10 Need to Know “It” Facts from Watch Mojo:

Can’t wait for 2019? Get that bowl of popcorn, dim the lights, and go on Amazon Prime (or sign up if you don’t already have one). It’s got a long list of thrillers and horror films ready to stream!