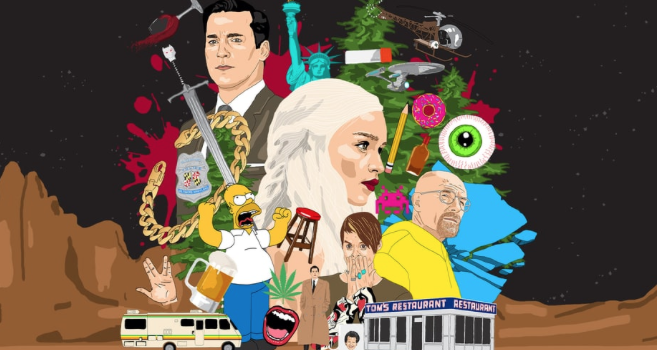 15 TV Shows You Have To Watch At College

Do you know how many people enjoy TV shows? According to Statista, 18% of Americans frequently binge-watched TV shows in 2016 – and we’re...

Do you know how many people enjoy TV shows? According to Statista, 18% of Americans frequently binge-watched TV shows in 2016 – and we’re not even talking about the ones who binge-watch once a while or the ones who simply watch TV shows at a slower pace.

Of course, we could watch TV shows at any point in our lives but the college years are the best time to engage in binge-watching. You have fewer daily duties, probably don’t have a 9 to 5 job, and you also have lots of stress to distract yourself from.

But why spend time watching the first show you stumble upon or looking for the right show when there are so many good shows out there to see? If you are a big fan of TV shows and want to watch truly good ones, we might have some recommendations for you.

Let’s be honest – many of the titles from the list would probably look familiar, but that’s only because they’re really good.

Now, even if you are a huge fan of binge-watching, we don’t recommend doing so with this TV show. Though it has only 13 episodes, it’s still worthy of slow appreciation. Moreover, you would probably need some time to recover as well.

Black Mirror is a great (and therefore terrifying) reflection of a modern society – and a true masterpiece.

School might be over – but this doesn’t mean you won’t be able to enjoy this TV show. Though it’s hard to say enjoy in this case. 13 Reasons Why is a novel-based TV show that is focused on very important and emotionally difficult topics like bullying, violence, teenage suicide, etc.

One of the finest examples of British TV shows, Broadchurch may remind you of Twin Peaks a bit (though definitely is less strange). It’s a show about two detectives, who have only recently become partners in work. They need to solve a murder case that happened in a really small town where everyone knows each other and seem harmless – but only at a first glance.

Even if you’re not a fan, you probably have heard about this TV show a lot. And you still might not be a fan of fantasy TV shows in general – but Game of Thrones would still be worthy of your time, we could promise. Moreover, you’ll finally be able to participate in all those discussions about characters, plot twists, and theories with your friends.

Doctor Who debut happened in 1963 – and the show has been loved ever since. The reimagined version of it was released in 2005, so if you’re not a fan of old-school TV shows, you could try watching newer seasons.

«Doctor Who» tells a story of an alien who travels in space in time. But it’s much more than a time-travel sci-fi story – it’s a story about kindness, friendship, love, and about how amazing these human beings are, after all.

Friends are one of the most iconic and well-known TV shows of our time. One of the best things about this TV show is its characters – most likely you’ll find someone to relate to among them. You’ll also be able to enjoy the amazing humor – and to relax in between writing and completing other college assignments.

Gilmore Girls is focused on mother-daughter relationships – but it’s not the only topic it explores. As mother and daughter bond and overcome life challenges together, they also explore themes of romance and friendships, school and socializing problems, and so on. Definitely worth checking out.

One of the best things about One Tree Hill is that show covers a big part of its main characters’ life, from high school years to adulthood. So if you’re looking for someone to relate to as your life changes and goes on, this could be a great show to inspire you.

Murders probably never looked so aesthetically appealing before, and if you are into murder cases, nice visual, and delicious-looking cooking, «Hannibal» is a show that is definitely worth watching.

It has only three seasons and seems to easy to devour – but is still a pleasure to watch. Just don’t get inspired by its aesthetic too much!

This teem drama has a very intriguing plot that keeps you hooked until the very end of its seventh – final – season. The characters are diverse and interesting, and their outfits are also something that is worth checking out!

This TV show’s characters truly are shameless – but this doesn’t make them any interesting to watch. Quite the opposite – you quickly might find yourself glued to a screen wanting to find out more. Moreover, it’s always better to learn from someone else’s mistakes than to make your own ones.

If you are a fan of Zooey Deschanel, you definitely should watch this TV show. And even if not, it’s still worth checking out. New Girl is an adorable comedy that could lighten up our mood even during the toughest college times.

The humor that The Office is packed with might not be your piece of cake – and in that case, you definitely shouldn’t force yourself to watch. But it’s still worth to try as if you enjoy it, you’ll laugh your heart out, we can promise you that!

The story of a chemistry teacher that once found out he had cancer and decided that he has nothing to lose anymore. And yes, this show is about two people making (and selling) crystal meth, and it’s actually very interesting to watch!

One of the most amazing sci-fi TV shows released during the past decade, Orphan Black tells a story of a woman that once accidentally found out that she has clones. The show is packed with amazing characters, brilliant storytelling, and dialogues that are just as funny as they are good. Check it out just to see the captivating performance of Tatiana Maslany, who’s received an Emmy award for her role (or roles) in this TV show.

Hopefully, this list will give you a couple of valuable hints. Did you watch any of these TV shows? Or maybe you would include other TV shows on such list? Please share your thoughts and opinions in the comments below.