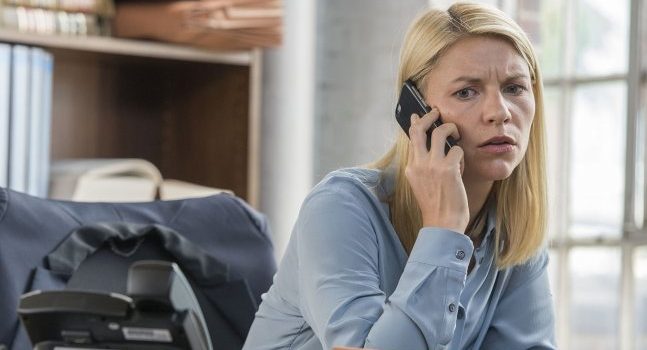 Homeland Season 6 Episode 2 Review – “The Man In The Basement”

Everyone has something to hide in this exhilarating and profoundly moving second episode of Homeland Season 6.

Opening and closing on two saddening sequences, this second episode of Homeland‘s sixth season brilliantly establishes why the layered character drama on offer is so potent. Despite the feverish intensities of life in the fast lane – their landscape a complex portrait of international threat, politics, religion, and postmodern sociology – it is the relationships shared between Claire Danes’ Carrie Mathison and her counterparts Peter Quinn (Rupert Friend), and Saul Berenson (Mandy Patinkin) which keep Showtime’s leading thriller the tremendous television that it is.

After a stunning reintroduction last week which established a new setting in New York City, and a new narrative timeline sandwiched between the presidential election and inauguration days, “The Man in the Basement” furthered the aftermath of Quinn’s rehabilitation, now residing in the apartment building below Carrie and daughter Frannie’s home. He is aggressive, distant, and quite frankly disrespectful; greeting his carer in the morning by throwing a mug of coffee at her, smashing a glass panel on the back door.

Carrie continues her interviews with Sekou Bah (J. Mallory McCree) – the American-Muslim who has been arrested on suspicion of promoting and supporting terrorism. Bah is looking at a lengthy sentence following the discovery of some $5,000 under his mattress; money he claims was given as a “loan” by his videography partner Sahd (Leo Manzari). As the paper trail progresses, it becomes clear that Sahd – who supposedly leant his friend the money so he could purchase airline tickets to visit his father in Nigeria – is actually an FBI informant. The money is merely just a piece to ensure the FBI has enough ‘evidence’ to convict. Bah has an extremely popular political voice online, one which actively opposes the many social and political jurisdictions of the United States, and now has a sizeable amount of concealed cash in his possession – likely seen to be for terrorist exchange and usage – therefore rendering him guilty in a court of law.

Meanwhile, Saul approaches his past partner and quizzes her about Elizabeth Marvel’s new president-elect, who has distinct issues with American soldiers being stationed in Iran. He believes that Carrie is secretly consulting with PE Elizabeth Keane, providing her with vital information and influence. These allegations are denied and objectified by Danes’ lead, but they actually turn out to be true. Carrie is indeed lying to Saul, but perhaps for his own good. She recommends that he be sent to oversee the reportedly failing nuclear deal in Iran, which massively expands the scale of this story arc, and indeed the convoluted relationship between the twosome.

“The Man in the Basement” is a packed hour indeed, but an exhilarating and intimately detailed one. Sequences surrounding the titular referee – Quinn – were some of the standouts, with a particularly arresting moment in a deli in which he suffers a debilitating seizure, clearly influenced by his refusal to cooperate, take any assistance, and his medication. Quinn also was at the very forefront of the episode’s most brilliant and sobering scene too, as he quietly asks Carrie “what happened to me?” She believes he knew the extent of his trauma, and that he had seen the globally-shared video footage of his poisoning in Berlin, but she couldn’t be more wrong. He asks to see the footage, and the pair sit in the sad darkness as her iPhone flickers with images of his mouth frothing, body quivering, sweat dripping. As the video concludes and Carrie tells of how she located him thanks to the floor tiling in the background, he asks her candidly why she even bothered to save him. It is a scene brimming with emotion and dramatic weight, as Danes’ body language conveys heartbreaking torment, even if the words refuse to fall from her lips. “You know why” she gasps through streaming tears. She doesn’t say “because I love(d) you,” but she doesn’t have to.

Controlled by discipline, order, and thoughtfulness, Danes maintains such deft presence in frame that it is easy to forget that Carrie is capable of alarming madness and paranoia. This is a very different Carrie, one we haven’t seen for a number of seasons; a person who is mapping her priorities as a business owner, mother, and friend, but one doesn’t think it’ll be long until the deceptive web of the political agenda begins to weave around her. She’s already a key member to Keane’s presidential arsenal, Saul is showing up, offering her information which conflicts to that of Dar Adal (F. Murray Abraham), plus her persistence to showcase Bah’s innocence could easily find her in contempt of court, which to an extent, she already is. Because what Season 6 is doing is playing those classic beats of Homeland‘s thematic DNA, but putting innovative twists on them. Everyone is hiding something, everyone has a motive, everyone has reason to be suspicious of each other.

Showrunners Howard Gordon and Alex Gansa are fantastically mapping battle lines which run simultaneously to the particularly heightened current affairs from the US as we speak. Despite being some 62 episodes in, the show is still constantly developing; ushering in intricate and captivating ways to render character, scenario, and environment. As we exit on a sequence awash with profound ambience, we are left to ponder on the deeply personal connection between Carrie and Quinn, and indeed wonder whether this relationship can be manipulated as we press onwards…