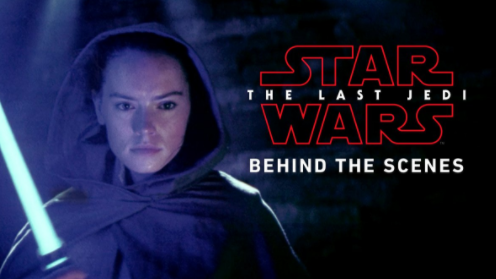 Star Wars: The Last Jedi Behind The Scenes Video Unveiled At D23

This weekend Disney’s D23 convention is continuing and yesterday saw one of their most notable videos released to the ultimate of fan reactions. Star...

This weekend Disney’s D23 convention is continuing and yesterday saw one of their most notable videos released to the ultimate of fan reactions.

Star Wars: The Last Jedi is undoubtedly one of the most highly anticipated blockbusters coming up in the near future and Disney have moved to whet the appetite even further with a majestic behind-the-scenes video teasing the Rian Johnson film.

Promising plenty of twists and an exciting and surprising story, The Last Jedi once again looks like it has been handled with the utmost sincerity and care from its new director and we can’t wait for it to finally arrive.

You can watch the video below.

In Lucasfilm’s Star Wars: The Last Jedi, the Skywalker saga continues as the heroes of The Force Awakens join the galactic legends in an epic adventure that unlocks age-old mysteries of the Force and shocking revelations of the past.

Star Wars: The Last Jedi is written and directed by Rian Johnson and produced by Kathleen Kennedy and Ram Bergman. J.J. Abrams, Tom Karnowski and Jason McGatlin are the executive producers.

Star Wars: The Last Jedi is released in UK cinemas on 14th December.